Lao Zi’s family name is Li, his given name is Er and his style name was Bo Yang. “Lao Zi” is how people call him with respect. “Lao” means old age and great virtue, and “Zi” is a laudatory title for man in ancient time. According to legends, his countenance and natural gifts were extraordinary. He was familiar with historical anecdotes and proficient with the system of ceremonial observation. He was the “Shou Cang Shi Shi” (the chief curator of the National Library or the Museum of History) and a Zhu Xia Shi (imperial historian) Lao Zi lived in Luo Yang, the capitol of Zhou, for a long time and witnessed the decline of the Zhou dynasty. 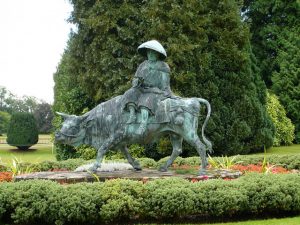 Lao Zi, heralded by a purple aura, appeared on a water buffalo. To enable people to return to their true nature, Lao Zi disseminated the Dao during a chaotic period in the Zhou Dynasty.

In 520 B. C., Lao Zi was implicated in an internal power struggle among officials in the Emperor’s court, and was dismissed from his position. Lao Zi deeply felt the evilness of the human world and left the secular world. He traveled to many parts of
the country without letting people know who he was.

One day in September, 478 B. C., the 93-year-old Lao Zi went west to Qin country. When he was about to go through Han Gu Pass, the chief guard, Yin Xi, learned through fortune-telling that an immortal was going to pass and so he ordered to have the road length of 40 Li cleaned and got ready to welcome the person. As expected, Lao Zi came. Yin Xi said, “Master, you are going to live in seclusion and we won’t be able to listen to your teaching anymore. Please write a book and teach the future generations.”

Lao Zi had never taught anything in the central land and he knew that Yin Xi was predestined to obtain the Tao, so he stayed for a short period of time and wrote down the famous “Tao De Jing”. After that, Lao Zi went west out of Han Gu pass and passed “flowing sand” (referring to the desert in Xinjiang Province). No one knew where he eventually went.

Confucius once visited the capital of Zhou and learned the system of ceremonial observations from Lao Zi. One day around 500 B.C., Confucius rode on an old cart pulled by a cow to Luo Yang , the capital of Zhou. The purposes of this trip were to observe the systems of previous emperors,  study the source of ceremonial music, and learn the rule of morality. He therefore visited Lao Zi who was the person in charge of the imperial library and familiar with the ceremonial system.
After completing tour, Confucius said one sentence that has been passed down for many generations, “In an abundance of theories, I would follow the Zhou State.” The system of ceremonial observation of Zhou was established while taking those of Xia and Shang as references. Confucius’ promotion the system of Zhou is an indication that he indeed had learned a lot during the trip.

During the visit, Lao Zi asked Confucius what book he was reading. Confucius replied that he was reading Zhou Yi (The Book of Changes) as all the saints had read the book. Lao Zi said, “It is ok for saints to read it, but why do you want to read it? What is the essence of this book?” Confucius replied: “Its essence is to promote benevolence and justice.” Lao Zi then said, “The so-called benevolence and justice are things that confuse people’s heart, like those mosquitoes stinging people at night and making them unable to sleep. They can only add confusion and trouble for people.

If you want to cultivate the Tao, you should just follow the existing natural law, and you will then obtain the Tao naturally. What is the use of promoting those things such as benevolence and justice? Isn’t that as ridiculous as looking for a lost sheep while beating a drum?

If Tao could be clearly related, people would tell it to their brothers. If Tao could be passed down to others, people would struggle hard to pass it down to their children. However, all these are impossible. The reason is very simple and that is if a person does not have a correct understanding of the Tao in his heart, the Tao will never come to his heart.”

Confucius said, “I have been studying the six ancient classics and trying to understand the ways our ancestors governed the country. I understand the successful path of good emperors such as Zhou Gong and Zhao Gong. I visited more than seventy dukes of different warring states; however, none of them wanted to accept my ideas. It seems that people are really difficult to persuade!” Lao Zi said, “The six classics you mentioned are all the old stuff of previous dynasties. What is the use of your mentioning them? What you are cultivating now is something old too.”

Therefore, Lao Zi said to Confucius, “As for those you have mentioned, their bodies have rotten away with only their words left. Besides, a gentleman would get into government service when the political environment was suitable, and reconcile to living like a weed when it wasn’t. I have heard that people who are good businessmen will hide their wealth from others.

A gentleman of high virtue often looks like a foolish person who doesn’t have any inner strength. You should get rid of your pride and desire, get rid of the attitude and the air, and get rid of those ambitions you are so passionate about, because these things are no good for you at all. That’s all that I want to tell you.”

Confucius did not know how to answer, but he did not give up his ambition: “a great man will do what he knows is difficult.” After finishing his visits to other places, Confucius said goodbye to Lao Zi and left Luo Yang, Zhou’s capital, feeling somewhat excited yet somewhat lost. He was excited about learning the ceremonial system but disappointed because of Lao Zi’s advice. Behind him, a stone tablet was erected which read “Confucius visited Zhou to learn the ceremonial observance system.” 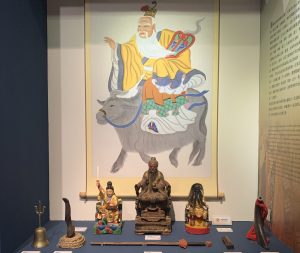 This is exactly the difference between an enlightened being who can save sentient beings and a philosopher in the human world. The saying, “There is little common ground for understanding between persons of different principles” refers to this difference. Lao Zi’s Tao, mysterious and hard to understand, is the teaching of gods, while Confucius’s words were just human theories and the moral standard for defining human behavior.