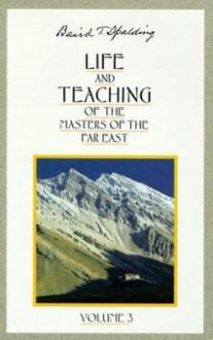 Life and Teaching of the Masters of the Far East

Dear Reader, you are not only a reader but a friend whom I have met face to face and conversed with, just as you have met and conversed with each of the characters in this book. I am certain they surround you with the full glory of the Divine Light of Life, Love, and Wisdom; and by surrounding you thus, they aid you in your understanding.

They envisage you knowing and accomplishing your Divine Mission, always alive, always peaceful and happy, always the Divine You. They see not only you but the whole human family, divine and pure, and every created thing or form as divine, created in the image and likeness of the divine; not one nor one sect nor one creed but all and that all inclusive.

None can appreciate these great people save those who have been admitted to the quiet of their sacred places and thoughts. They LIVE Truth, which is a part of the Universe itself. Life is really traceable back into the misty past, which bears to us the accomplishments of hundreds of thousands of past centuries. To us, life is bound about by every limitation and convention. To them, life is boundless, ceaseless, unending bliss and happiness; the longer the span of life, the greater the joy and the more worthwhile the living.

None that understand and love these people can doubt their teachings; neither can he doubt their true sincerity when he has partaken of their hospitality.

The western world looks to the outer, thereby touching the hem of the garment. The eastern puts on the robe but not as a garment that may be laid aside.

The West polish the vessel of the lamp. The East fan the flame that it may give forth a more intense light.

The West look to the outer with longing eyes, back of which is the glow of spiritual vision, the seeking of true knowledge. The East know that flesh must be illumined by the light of the flame that is first kindled from within, then allowed to shine forth to the without as the full blaze of the noonday sun.

The West name themselves material. The East live truly in the allness of spirit. They behold each and every one living by compelling, impelling, sustaining Spirit—it matters not what the location, be it in the great snows of Alti Himalaya, the busy modern city, or the most secluded monastery.

That which to the western world seems miraculous and unbelievable is to the poised Hindu thought, the natural outcome of the acceptance and the bringing forth of Spirit, that which is set forth as God in manifest form. They that are fully alive know full well that there is far more than that which comes under their personal recognizance; in fact, there is much more than ever has been dreamed of in any philosophy.

Therefore, there are no apologies offered for this book or for those which have preceded it.

When you look longingly with a clear vision toward an accomplishment, it is your divine heritage to command that you place yourself in such a receptive attitude that the ability is already yours to bring forth your ideal.

God speaks through the God-man today just as God has spoken down the long ages. The knowledge which the people in this book convey is by no means new, although the presentation brings a new light to the western world.

The main object of their lives is to give knowledge and enlightenment to humanity through pure knowledge, aflame with love. Their great mission is to pave the way toward peace and harmony through man’s great power to accomplish. They are the greatest friends of true science, religion, and philosophy; and they proclaim these as well as all men, brothers, as Truth is one. Thus science becomes the golden thread upon which the pearls are strung.

The day is here in which a large portion of humanity has already outgrown the old concept of Divinity. They have lost their faith in teachings based upon faith alone; they have learned that to be good in order to gain a heavenly reward after death is a fallacy, a very low ideal—this idea of being good for the reward’s sake and the special privilege of playing harps and singing psalms forever.

They have realized that this is an expression of self-interest only and completely foreign to the teachings of the Christ of God, the God-man fully alive.

The church and the graveyard are often in the same field. This alone is a direct acknowledgment that Christian teachings have not been even comprehended. The Christ-man has spoken and the listening ear has heard, “If a man believes in me, he shall never die.” The God-man knows that the one who is in sin or lives with sinful vibrations surrounding him dies, and unto him “the wages of sin is death”; but the gift of God to the God-man in the kingdom of God here on earth, the human body perfect in the flesh, when man lives true to the God vibration and wholly in that vibratory thought.

The people in this book have taken God out of the realm of the supernatural and of superstition and have placed Him wholly in vibratory frequency, knowing that as they keep their bodies in the divine vibration, they never grow old and never die.

When the vibrations of their bodies are lowered or allowed to slow down, death ensues. In fact, these people know that when the mistake of death is accomplished, the body is vibrating at such a low rate that the emanating life-vibrations are actually crowded out of the body temple and that those vibrating life-emanations still hold together and maintain the same form which the body had when they were crowded out. Those emanations have intelligence and still revolve around a central nucleus or sun which attracts and holds them together. These emanating particles are surrounded by an intelligent emanation that assists them to keep their form and from which they again draw substance to erect another temple. This is in direct accord and works in complete harmony with the intelligence that has been built around the body during their life cycle.  If that intelligence vibrates at a low frequency or, in other words, is weak, it loses contact with the emanations of life and energy that have been forced out of the body (or form of clay after the life-emanations have left it) and the emanations finally disperse and return to the source, then complete death is accomplished; but, if the intelligence is strong, vibrant, and active, it takes full charge immediately and a new body is instantly assembled. A resurrection has taken place; and through that resurrection man is perfected in the flesh. Not all can hear or accept such a revelation.  “He that hath ears to hear, let him hear.” [Mark 4:9.] He whose understanding is developed sufficiently, is able to comprehend.

Thus, large portions of humanity are developing a science through which they are again discovering that God has always lived in man and with humanity; yet they for a time have not known God, they have only lost sight of the God-man.

To those of whom I have written I dedicate this book, as well as the books that have been published. At the feet of these near and dear ones I lay my deepest respect and gratitude and in no way do I feel that I am conferring upon them the honor due them.

We went doubting; we left with the greatest regrets, loving them every one, feeling that we had gained a truer and deeper insight into the science of Life and True Living.